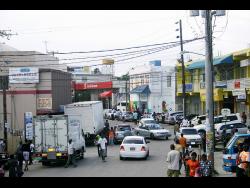 A new KFC outlet is currently under construction in Christiana, and we hope that it will facilitate further development by attracting other businesses to the town, contributing to the increase of employment in rural communities.

The construction of KFC has resulted in the eviction of the taxi operators from the private car park that it now occupies. These taxi operators services various routes, including Albert Town, Lime Tree, Licfield, Lowe River, Criag Head, Coleyville, Pike, Dobson and Ticky Ticky, are now on the roadside, resulting in chaos and traffic congestion. This is further compounded by additional lines of customers from NCB, Bank of Nova Scotia and Western Union spilling on to the road.

As a resident, I am disappointed that the councillor for the division and the Manchester Municipal Corporation did not foresee the need for a transportation centre in Christiana and appear clueless about how to solve the current traffic gridlocks.

The Manchester Municipal Corporation should engage in dialogue with other stakeholders to identify and lobby for a transportation centre in a growing town.