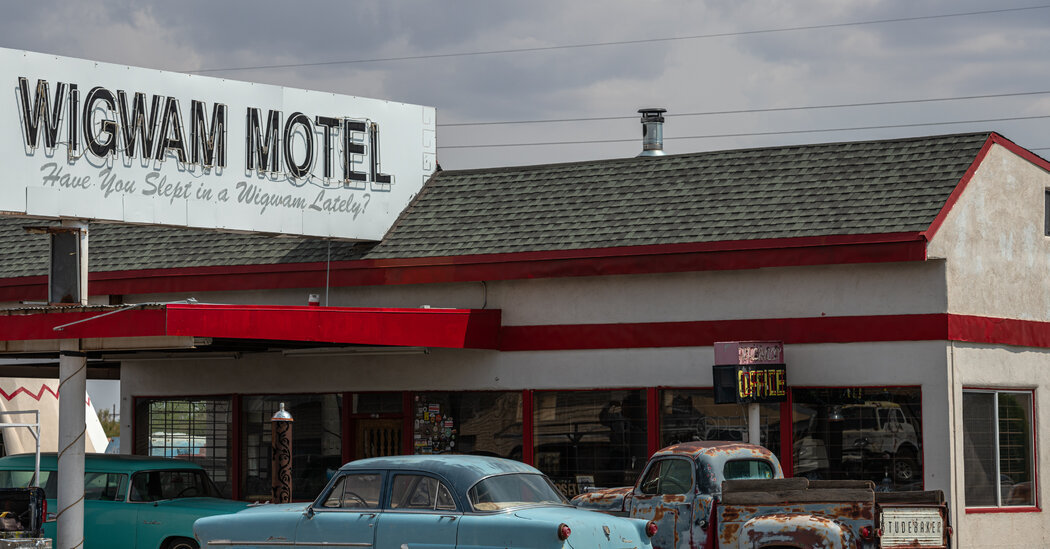 According to the National Park Service, the architect Frank Redford, who had patented his design for a tepee-shaped building, disliked that word so he called them wigwams instead. Wigwams are domed, cone-shaped or rectangular structures used by the Algonquian and some other Indigenous people in the eastern half of North America.

In 1938, Chester Lewis was so taken with a Wigwam village he saw in Kentucky, he purchased the plans and rights to use the name. One of the Wigwam motels remains in the Lewis family. That one, off Route 66 in Holbrook, Ariz., was the sixth village built, and periodically gets a nod in movies and television. The “village” features 15 28-foot-tall white concrete-and-steel, tepee-shaped units decorated with a red zigzag and arranged in a semicircle. Calls to a motel spokeswoman were not returned.

Samir Patel, whose family owns the final village built, in San Bernardino, Calif., said they haven’t received complaints about cultural misappropriation. “We just try to manage the place and preserve it as a piece of history,” he said. The third remaining Wigwam Motel is in Cave City, Ky., and was one of two in that state. (Others were built in Alabama, Florida and Louisiana.)

History alone isn’t enough to hold onto something when it’s hurtful, at least not at Squaw Valley, in California, home of the 1960 Winter Olympics, which announced last summer that it will have a new name this year.

“We have to accept that as much as we cherish the memories we associate with our resort name, that love does not justify continuing to use a term that is widely accepted to be a racist and sexist slur,” Ron Cohen, president and chief operating officer of Squaw Valley Alpine Meadows, said in a statement. A new name has not yet been announced. The ski resort near Lake Tahoe is on land that was once home to the Washoe Tribe.

Crystal Echo Hawk, the founder and executive director of IllumiNative, an advocacy group, said in an email that tribal members and their advocates have pushed for changes like this for decades. “Removing language that stereotypes and harms Native people have long been a focus for Native activists,” she wrote.