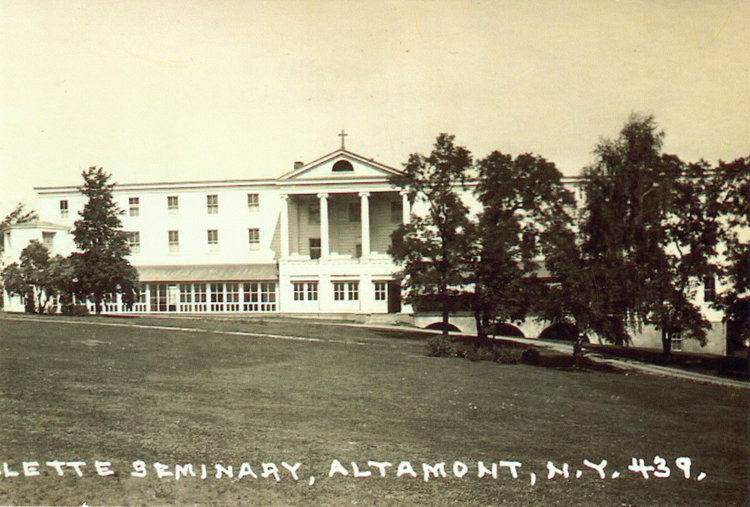 This is the second and final part telling the saga of the Kushaqua. The first part, “The Kushaqua: Colonel Church’s ‘mammoth hostelry’ rises on the shoulder of the Helderbergs,” was published on July 26, 2021.

Following Dr. F.J.H. Merrill’s decision in 1902 to lease his summer home, the Kushaqua reverted to its original function as a country resort hotel. H.B. Smith took over, investing in extensive renovations to update the building, renaming it the Helderberg Inn. His venture proved a failure with the inn going into receivership.

A large ad appeared in The Enterprise, announcing “Receiver’s Sale March 24, 1904” to be held in front of Albany City Hall. Parcel No. 2 was “the beautiful hotel property known as the Helderberg Inn situated at Altamont.”

Also listed were parcels 3 to 7, land and farms associated with the hotel. The following day at the inn itself, “all personal property contained in and about the hotel” was to be included at auction.

F.H. Peterson next attempted to make the hotel profitable, but after two years it was again a financial failure.

The affluent summer colony members who owned “cottages” in the hotel’s vicinity had grown increasingly nervous about the fate of the inn. A brief article appeared in The Enterprise on Oct. 7, 1907, announcing the sale of the hotel and surrounding land to a syndicate composed of eight men owning property nearby, including J.B. Thacher.

The Enterprise noted that their purchase came after “learning that it was to be sold, determined to become owners that the conduct of the hotel should be to their liking.” Perhaps it was to the relief of Altamont villagers as well, seeing as the article concluded, “The transfer of this property to these people is an assurance that it will be conducted as a high class hostelry.”

Rapidly, the automobile had become the favored form for transportation among affluent Americans, making the steep original road from the village to the hotel a challenge for early cars. Within a year after the syndicate’s hotel purchase, a new road with a grade of less than 7 percent was opened, which “fills a long felt want,” built through the efforts of syndicate member and Albany businessman Gardner C. Leonard.

The Helderberg Inn syndicate footed the bill. A year later, the state highway commissioners were entertained at dinner at the inn by syndicate members during which they discussed a proposed route for a state road from the village. By October, a survey had been made for the proposed road with a good grade that avoided sharp turns, finally completed in 1911.

A 25-page booklet or prospectus, undated but probably from 1914, gave a detailed description of the facility. Available for guests were 55 guest rooms, featuring hot and cold running water with modern plumbing in private or semi-private bathrooms.

The inn was warmed by steam heat and, as soon as electric lines were strung out to Altamont, the hotel was completely wired. Ample telephone facilities were provided. Fresh flowers from the hotel greenhouse were always placed throughout the public rooms.

Hotel guests had access to dining rooms, lounging rooms, a ballroom, a sun parlor, and the piazza. Indoors, energetic vacationers could bowl in the inn’s alley; play billiards, ping pong, or a game called bolero; or climb to the observation tower.

Sedentary folks could enjoy reading a book or magazine from the hotel’s 2,000-volume library or relax in front of one of the inn’s many fireplaces. Additional outdoor activities such as horseback riding, tennis, and camping were added over the years.

Meals and service were described in the brochure as “perfect.” Food was “delicate and delicious,” carefully served. There was no bar, but vintages in the cellar were available by request, seeking to please both temperance folks and tipplers alike.

Service was available day and night from servants “selected with care.” Each day, afternoon tea was served, weather permitting on the piazza or in the walled garden. Guests were assured that there was “all white service throughout,” reflecting the intense prejudice of the day.

During the years that the syndicate owned the inn, it was renovated and updated as a series of managers attempted to develop a profitable resort. There were always a number of long-term vacationers, but hardly enough to fill 55 rooms.

It had become increasingly common for Albanians to drive out for only the day or weekend. Hops, dances held each Saturday evening, and tea “dansants,” dances held at Saturday tea time, were fads in that era.

Many who had driven out remained for dinner and then danced the evening away to an orchestra at the hop, often remaining overnight. It became a destination for auto or driving parties who appreciated the “bountiful supply of well cooked food for their Saturday and Sunday outings.”

Catered banquets or luncheons, sometimes mentioned in The Enterprise, provided an additional source of income. The Altamont High School Alumni Association June banquet was held there several years, while a luncheon for 70 ladies, members of the Eastern New York Branch of Collegiate Alumnae Association took place one summer. The University Club of Albany came out one Saturday, played a pick-up game of baseball, staying on for a banquet and dancing.

As years went by, the resort hotel business, proving to be a losing proposition, resulted in the formation in October 1914 of the Helderberg Golf Club Inc. Gardner C. Leonard, whose summer home “Hardscrabble Farm” adjoined the hotel property, had designed a prospectus, describing the advantages of the hotel, grounds and plans for a golf course and winter spots.

Obviously the syndicate members hoped this would be a financial way forward. Local Rotary Club members were being approached by Leonard, who urged them to buy $100 bonds in the operation, automatically giving the membership in what was characterized as a “model golf club” by its promoters

The Albany Evening Journal, when describing the proposed golf club, noted the owners had purchased it “some time ago to maintain the character of the neighborhood.”

The spring of 1915 brought word that the Helderberg Golf Club was being “thoroughly overhauled with extensive alterations and improvements to the club building as well as the grounds” where a nine-hole golf course was constructed. When the club shut down for the season that year, “a most satisfactory season” was reported.

The club reopened in 1916, but there were very few references to it in The Enterprise and it can’t be determined if it operated in the summer of 1917. In December 1917, the property was again on the auction block, this time selling at a huge loss considering all the money that the syndicate had invested in maintenance and upgrades in the years since they had acquired it.

The $100 bondholders would have lost as well. The purchaser was Frank A. Ramsey, representing Ramsey and Co., real estate brokers of Albany, who paid $9,100 for a property valued at $100,000.

It soon became apparent the new owner was the Catholic Diocese of Albany, which planned to use the former hotel as a summer residence for the Sisters of Mercy, nuns who did a tremendous amount of work in the diocese. The old Kushaqua now became known as the Convent of Mercy.

By 1918, the United States was deeply involved in World War I. As casualties began to mount, places of respite were needed where wounded and gassed soldiers could heal and recuperate.

Albany Bishop Thomas Cusack wrote directly to President Woodrow Wilson, offering him the property for these men, giving Wilson a description of the building and grounds.

The government had requested use of hospitals and summer resorts for these men, but nothing came of Cusack’s offer due to its location being far removed from coastal ports, making it too difficult to transport these seriously affected men to the site. Perhaps after gaining possession of the property, Bishop Cusack had now begun to realize just what the diocese had taken on.

The bishop’s prayers were answered when, in 1921, Rev. Simon Forestier, acting for the Missionaries of Our Lady of LaSalette, purchased the property from the Diocese of Albany with the plan that the property be used to train seminarians studying for the priesthood.

Four years later, the structure had been renovated, looking nothing like the original hotel building. For over 20 years, the building acted as a seminary, junior college, and novitiate for this order.

Early on the morning of Oct. 25, 1946, as the seminarians, resident priests, and lay brothers were eating breakfast in the first-floor dining room, the smell of smoke became obvious. A fire, which seemed to have begun in the attic, began raging, spreading rapidly throughout the old wooden building

Fire apparatus quickly rolled in from Altamont, Guilderland Center, and the Army depot. Two trucks were sent out from the Albany City Fire Department.

Even with the arrival of the firemen, within an hour the seminary was consumed by a blaze driven by high winds. Flames were reported to have shot up several hundred feet in the air. Inadequate water supplies simply could not quell the out-of-control blaze in the huge wooden structure.

Fortunately, because all the residents had been downstairs at breakfast when the fire broke out, there were no injuries, but a valuable library was destroyed and all personal property was lost.

The LaSalette Fathers immediately began to rebuild on the site and, in 1953, opened the current building that stands there today. It was used as a seminary until 1979, when the lack of men wishing to enter the priesthood led to a change in the use of the building.

For a time, it was known as LaSalette Christian Life Center and Shrine. But, in 1984, the LaSalette order sold the building and land on the west side of Route 156. Father Peter G. Young began to use it as a treatment center for alcoholics who had been convicted of nonviolent offenses, which operated there for many years.

Today the Peter G. Young Health and Wellness Center continues this long tradition of seeking health there, begun 135 years ago.