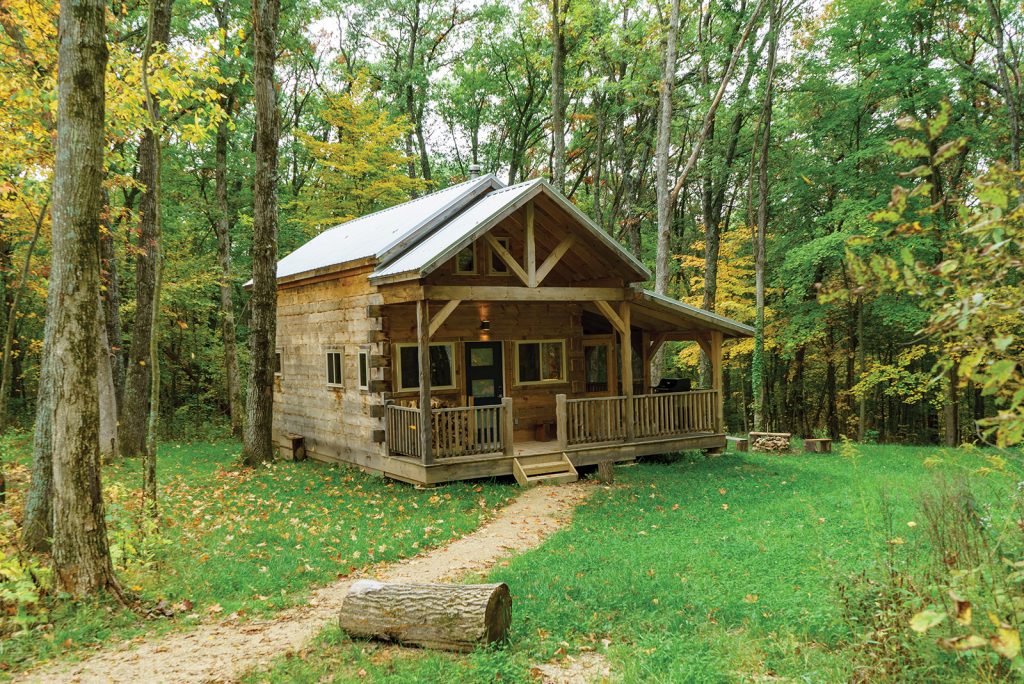 Located about three hours southeast of the Twin Cities, Viroqua is the heartbeat of Wisconsin’s Vernon County. There are more than 200 certified organic farms here, not to mention the headquarters for Organic Valley. The farmer-owned dairy cooperative started in 1988; it’s now the largest organic farming co-op in North America. More than 400 Organic Valley farmers live in Wisconsin, and 110 of them are in Vernon County.

Driving to Viroqua is a terrific excuse to pick a 90-mile leg of the Great River Road, stopping at whatever piques your interest along the Mississippi. For us earlier this year, that meant Hanisch Bakery in Red Wing for old-fashioned donuts, scenic Roschen Park in Lake City to watch the geese ice skate, and the Minnesota Marine Art Museum in Winona. After stopping for a quick photo op with the World’s Largest Six-Pack in La Crosse, we continued south toward Viroqua.

Desolate roads looped through rolling hills, their shoulders staked with caution signs warning of slow-moving Amish buggies. Weathered barns dotted the hillsides and deer flitted across the pavement just meters from our bumper. It was the stuff of Norman Rockwell paintings, minus the billboards advertising firearms and pawn shops.

When we arrived in town, the first thing we noticed was the vintage marquee on the Historic Temple Theatre of Viroqua, built in 1922, followed by the large-scale murals painted on the sides of downtown buildings. Already, this town of 4,377 felt a bit different—more interesting—than neighboring Coon Valley, where we had mostly seen dive bars, antique shops, and ATVers roaring over dirt tracks.

For a small town, Viroqua has a wealth of farm-to-table businesses to explore—and where better to start than at the 26-year-old Viroqua Food Co-op? The grocery store sold a vast array of Organic Valley milk, cheese, and butter, but the locavore pride didn’t stop there. We spent an hour combing the aisles, marveling at Wisconsin-made offerings: locally grown shiitakes and giant bulbs of black garlic, seedy artisan crackers from Potter’s in Madison, lefse and elderberry jelly from Austin’s Rush Creek Farm in Ferryville, wild bergamot mead from Kickapoo Meadery in Blue River, and organic grapefruit soda from Wisco Pop!, fizzed up locally.

Then there was—heaven help us—the cheese section: a sea of coolers brimming with Dairyland cheesemakers, their smiling pictures and bios posted alongside their award-winning wheels and wedges. Affable cheesemonger Sarah Clemens was the perfect guide—deeply knowledgeable about dairy and eager to introduce us to new products. Our final haul included Wischago, a Manchego-style hard cheese made with raw cultured sheep’s milk by Hidden Springs Creamery in Westby, 10 miles down the road; and Bleu Mont bandage-wrapped cheddar from Willi Lehner, who, Clemens excitedly told us, ages his cheese in a cave he built in Blue Mounds.

All stocked up on groceries, we drove out of downtown Viroqua, hung a left past the Angus cattle at Woodhill Farms, rumbled down a dirt road with hills rising on either side, and finally up, up, up a steep drive to the isolated Airbnb we had booked for our weekend getaway. The sun was setting fast and our rental, the Tanager cabin at Driftless Creek, glowed like a magic orb in the darkening woods.

Driftless Creek is a labor of love for host Rodney Cain and his family. The Milwaukee transplants moved to Viroqua for its “unique character, beautiful landscape, and inspiring people,” purchasing a 75-acre parcel cushioned on three sides by state forest. Tainter Creek, a Class 1 trout stream, is down the hill to the east; the more challenging McGraw Creek courses to the west. In due time, the Cains plan to add more cabins to the property, as well as a network of hiking, snowshoeing, and mountain biking trails, an outdoor education center, treehouse, and sauna.

The Tanager itself was more than enough for us: a Scandinavian-modern cabin so new, it still smelled of fresh lumber. Handmade concrete counters and a glassed-in tile shower gave it a sleek, contemporary edge, while a Norwegian wood-burning stove lent an air of rustic charm. We spent our evenings reading and tinkering with a ukulele and guitar hung on the cabin wall, and rested like the dead on a plush memory foam mattress. (The cabin sleeps five total, with two in a bedroom and three in an upstairs loft.) We loved hiking the property’s trails with our dogs, our footsteps soundtracked by birds rustling in the branches and the distant mooing of cows.

Though we could’ve easily holed up in the cabin, cooking every meal in its well-equipped kitchen, we came to Viroqua to eat. One of the most beloved spots in town, Rooted Spoon, is a local caterer that pivoted to takeout during the pandemic. (It has since reopened dine-in options.) Every Thursday, it offers a three-course prix fixe menu inspired by a different country or culinary region (Iceland, Malaysia, the Honduran island of Roatán), made from scratch using fresh, organic ingredients. In addition to serving a knockout “triple taco takeout” on Fridays and weekend brunch, Rooted Spoon sells a curated selection of Wisconsin brews, booze, and creative cocktail kits. Our pineapple rum punch included everything we needed to fashion two fishbowl cocktails, right down to the little paper umbrellas. Rooted Spoon founder Dani Lind has been working with farmers in Vernon County for two decades, but she’s also keen to spotlight aspiring food entrepreneurs. The weekend we were in town, the teen founders of MoonBear were hosting a dumpling and mochi pop-up shop out of her event space.

Over at Magpie Gelato, Bard Bread & Pastry was popping up for its Saturday bake sale. Business and life partners Matt Kronschnabel and Natalie Hinahara started the company in 2018, but you’d think they had 100 years’ baking experience under their aprons judging by the food—that’s how ridiculously delicious their naturally leavened farmhouse boules, chocolate rye cookies, and aronia berry scones are. Wonderstate Coffee, a solar-powered sustainable roaster, lured us back multiple times with its biscuit sandwiches and creative coffee drinks, like The Happenstance, a flat white-style brew with coconut syrup, cardamom, and zingy lemon zest. Driftless Café, meanwhile, wooed us with its takeout brunch, including a decadent butterscotch pistachio doughnut. Owner Luke Zahm is the new host of PBS’s Wisconsin Foodie show, so you know he takes farm-to-table dining seriously.

When we weren’t stuffing our faces, we shopped for Red Wing crocks and vintage Mexican pottery at the multi-vendor Viroqua Public Market and browsed half a million used books at Driftless Books & Music. Bookseller Eddy Nix, we learned, is a kind soul with a hippie spirit, open to bartering for fresh produce or handmade goods. Housed within an old tobacco warehouse, his bookstore is fastidiously organized, with sections broken into micro topics (Insects, Conspiracy, Norwegian language books) and interspersed with collectible art, brass instruments, old box cameras, and rows of rusty beer cans. There’s even a sculpture garden dedicated to the haunting work of late outsider artist Robert Horwich. (Don’t be alarmed by the disembodied dolls and shredded American flags—Dr. Horwich was an esteemed biologist and beloved locally.)

Though we had planned to drive an hour north to hike in the 8,600-acre Kickapoo Valley Reserve, the Bard Bakery crew tipped us off to some fine trails just outside Viroqua. Sidie Hollow County Park was everything we wanted: 10 miles of empty trails spidering out from a scenic lake. It felt good walking off the weekend’s culinary indulgences.

Our final stop before heading out of Viroqua was Thoreau’s Garden, an organic, biodynamic greenhouse shop run by the students and faculty of Thoreau College. We went in seeking a simple houseplant, but what stood out were the vegetables and herbs: lettuces, microgreens, basil, rosemary, and cardamom—lest we ever forget Viroqua is, first and foremost, a food town.

Japan-born founder Nami Cutler channels the power of koji for these “meal in a chip” snacks, a dehydrated superfood made with chopped veggies, organic flaxseed, oats, and lentils. They’re crunchy, tangy, and mouth-wateringly delicious. facebook.com/namichips

It’s arguably the best name ever for a salsa company, but also arguably the best salsa in Wisconsin. It’s made in Eau Claire with serrano, habanero, ghost, and scorpion peppers, so it’s actually fiery—none of this “Minnesota spicy” nonsense. chipmagnetsalsa.com

This classic French-style ale, made by a woman-owned organic brewery in Madison, has fruity notes with a crisp, dry finish—a golden match for an epic cheese platter. giantjones.com

Ryan Wagner and Justin VerMeer have been cranking out artisan salami in southwestern Wisconsin since 2017. You’ll never go wrong with the loukanika, a snappy Greek-style pork salami with cumin and orange zest, or the Spicy Finocchiona, Italian-style salami with a dash of Pinot Noir and a fine fennel kick. driftlessprovisions.com